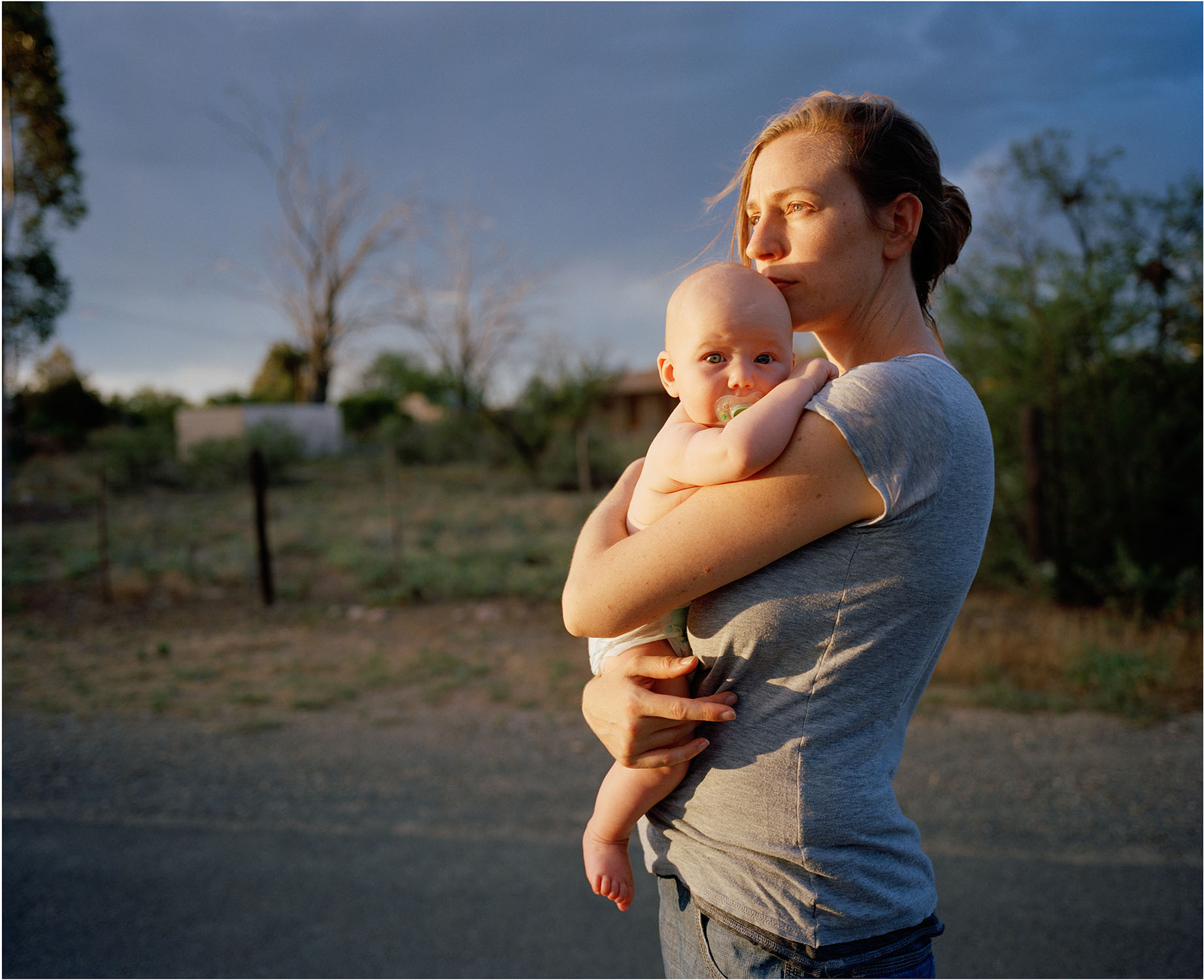 For those who have never been there, or have only been there briefly, Sicily is sea, beautiful baroque palaces, archaeological sites, succulent food, immigrants arriving from lands beyond the sea, hot and lots and lots of people. All this is certainly there, but there is much more. There is a very strong cultural fabric that is renewed every year, opening dialogues for reflection.  This is the goal also this year of the Ragusa Foto Festival, now in its eighth edition. Its passionate director Stefania Paxhia and the organization’s team bring, in the beautiful ancient buildings of Ragusa Ibla, a rich festival (15 exhibitions, conferences, screenings, portfolio reviews, open calls) which, for a month, focus on the family, avoiding falling into the clichés, through national and international authors, whose exhibits show the thousand faces of the cell of human organization. To better understand this festival, we meet Steve Bisson, curator of this edition, who has come from Paris to enrich the staff of the festival.

From your biography we learn that you are Italian-Belgian, you have studied in various parts of the world and you are also an adjunct faculty member at Paris College of Art.
How did this collaboration with the Ragusa Foto Festival, many km south, come about?

For the last 15 years, I have worked all over the world. Life always surprises you… I approached Ragusa during the writing of the book ‘Pleasure Island’, by Federico Arcangeli, which I recently published with Penisola Edizioni. I was interested in a written contribution by sociologist Aldo Bonomi, director and founder of , a renown socio-economic research institute of Milan, and so I got in contact with Stefania Paxhia, herself researcher, who works with him since years, and actually is the director of the festival. At that moment a dialogue was born. I must say that I was immediately attracted by the idea of doing something in Sicily. I believe that in this Mediterranean region, far from European pragmatism and neoliberal colonialism, we are witnessing different forms of cultural and social cohesion. I am very interested in these phenomena, in the dynamics around which a community is structured when economic forces are less overbearing. Sicily is an island with an extraordinary wealth of civilization, a diversity that has stratified over the centuries, and has produced a colorful and lively identity. Here the western Roman and eastern Greek horizons, then mixed with the Arab and Norman heritage. If the consumerist catechism is underway, then these are the territories with which we must measure ourselves in the future, to find the seeds of a different human coexistence.

This year’s theme of the Festival is “Intersections” and focuses on the family as a changing institution. How did you get to the selection of the authors at the festival?

Firstly, we have set up an international call through Urbanautica Institute. This type of initiative is important to me as it is a proof of openness and lifelong learning. Many proposals were submitted. During the selection, an important criterion was to represent the multitude of nuances of the family question. I tried to give importance to aspects that usually find little space in the debate. Issues that although less expected and known, remain important. In fact, I believe that often the dialogue on the family is monopolized by a few positions, which however opposed, catalyze all the attention of the media, and leave no space for other thoughts. All these authors with their contribution make up the collective exhibition “Family Lexicon”. In addition, we have a few personal exhibitions that stem from my previous knowledge of authors and projects. Like David Chancellor, who I had exhibited in Hong Kong years ago, I knew he had an interesting series about his family and thus I invited him to participate. Or Sam Harris, whose work I had met a few years ago in another Southern town of Italy, Lecce.

The festival takes place in Ragusa, a land where culturally the family institution is very central and in many ways traditional. What kind of reflection does the festival want to arouse in the public (Sicilian and not)?

In my opinion, the term “traditional” is relative. What we consider today as traditional perhaps centuries ago was thought of as a great achievement. What we need to learn is that there is no pharmaceutical recipe for the family. Every place has an identity that is an alchemical cultural product. The neoliberal culture tends to impose models, to reduce and to label as retrograde everything that is out of step. As I said last year in Venice at the international conference “Shaping the cities: Forum for sustainable cities and communities” to which I had been invited, we must ask ourselves what a culturally sustainable place is. Is the pasta “bolognese” heated in a microwave by the Chinese management who took over an old tavern culturally sustainable? Now, returning to Sicily, it is clear that there is more resistance to modernity than in other places. I think that the social and family dynamics, more than in the past, suffer from the propaganda that sees more and more the individual as a stateless being, resigned to the monthly salary, and possibly indebted thanks to the credit card. In neoliberal economies, this is the new religious belief. The family is no longer indispensable. Now, in territories where the rules of the game are different, the family remains a form of protection for the individual. So we must ask ourselves how those family ties represent a form of “otherness” to the individualistic and compulsive flight, to that liberal rhetoric that sees the human being as an omnipotent and volatile atom but homologated and released from any community constraint. For this reason, we decided to open an artist’s residence to offer the possibility to a photographer of working on the theme of Ragusa Foto Festival, of facing people, their stories, and offering a perspective that becomes an opportunity for comparison and sharing. For me, dialogue as an Aristotelian form of politics remains one of the best ways to produce rather than impose visions. This applies to the family as well as to any other topic.

Even the world of Photography is in great evolution. For example, photographic publishing has changed its face completely in recent years: the large publishers have shrunk and many independent realities have emerged, such as Urbanautica, the publishing house you founded. Can you tell us why Urbanautica was born and what is its purpose?

Urbanautica developed immediately as a knowledge platform. In ten years, hundreds of interviews and reviews have been produced, accompanied by collaboration with cultural institutions on exhibitions and research projects. The books have arrived later. We are not a publisher born to ride the photo book wave. Many authors were asking us to collaborate on an editorial path, so after some collaboration with existing publishing houses, I decided to start our own book series. The books produced by Urbanautica will remain few and increasingly linked to research activities. In 2019 Penisola Edizioni was also born, a new publishing house dedicated to discovering and publishing Italian authors. It stems from the opportunity to work jointly on the cost-effective production of limited editions of books.

Another reality in which you are involved is MOVE CINE ARTE, where art, photography video are mixed. Why this adventure? have the traditional separations between these disciplines fallen?

For a couple of years, I directed art film festivals. Then in 2016 with my Brazilian friend Andre Fratti Costa we decided to work together at the festival he had founded a few years earlier, the MOVE CINE ARTE. The idea was to make it more international and itinerant. We have reached the third edition which will open in September in Sao Paulo, and we are quite proud of it being a totally independent festival. The cinema experience is very different from that of photography. Although many artists have somehow adopted the video language and use it for their own purposes. In fact, our screening sessions are characterized by a strong interaction with the public. We often invade unusual spaces, apartments, or friendly cultural spaces, and cinema becomes a pretext for creating an exchange. I must say that compared to Europe, this type of format works well in South America, where there is a less annihilated climate and people have more desire to talk, to raise their hands and to debate.

Last question, typical for our blog. You are now a curator, professor of photography, editor and festival director. Was this your dream job when you were a child?

No, I certainly didn’t imagine this route. I was thinking of playing soccer with the other kids in the village. However, I had a great love for geography, for the planet, for the maps, and for travel. I didn’t know why. I just knew I wanted to do it. Today I believe that this curiosity is partly satisfied. I realized that there is no better place ever, it depends on how we feel. After all, as Chatwin wrote, “home is where you have your friends“. However, I am aware of why I approached this career. On the one hand, I like to give more than to receive. This is essential in this profession where economic rewards are often very uncertain, especially in Italy. On the other hand, I am fascinated by how visual media can summarize and be very effective in addressing issues relevant to the environment and society. After all, art helps us to observe the world differently, it helps us to improve our way of feeling life.

Steve Bisson is an Italian-Belgian curator, writer, and publisher. Currently an adjunct faculty member at the Paris College of Art. Interested mainly in anthropology and visual culture with over 15 years of experience. In 2019 he founded the publishing house Penisola Edizioni and, in 2009, Urbanautica, the well-known international visual art platform. Since 2017 he is co-director of the Move Cine Arte film festival. He has written several publications, essays, reviews, and has taken part in many commissions and juries in the field of photography and beyond. He has curated over 50 art and photography exhibitions and festivals, collaborating with museums, galleries, cultural institutions around the world.

Yourpictureditor, Media Partner Ragusa Foto Festival. We are an international network of photo editors and experts in visual communication. Our activities are photo & video research, copyrights management, portfolio editing, photo research and production for social media, communication support for festivals and exhibits. Through this Blog we deepen the themes that are at the heart of the photographic scene, talking with the main players and participating in the dissemination of photographic culture. Need support for your photographic projects? Get in touch.

Cover Photo ©David Chancellor, from the Exhibit Handle Like Eggs.