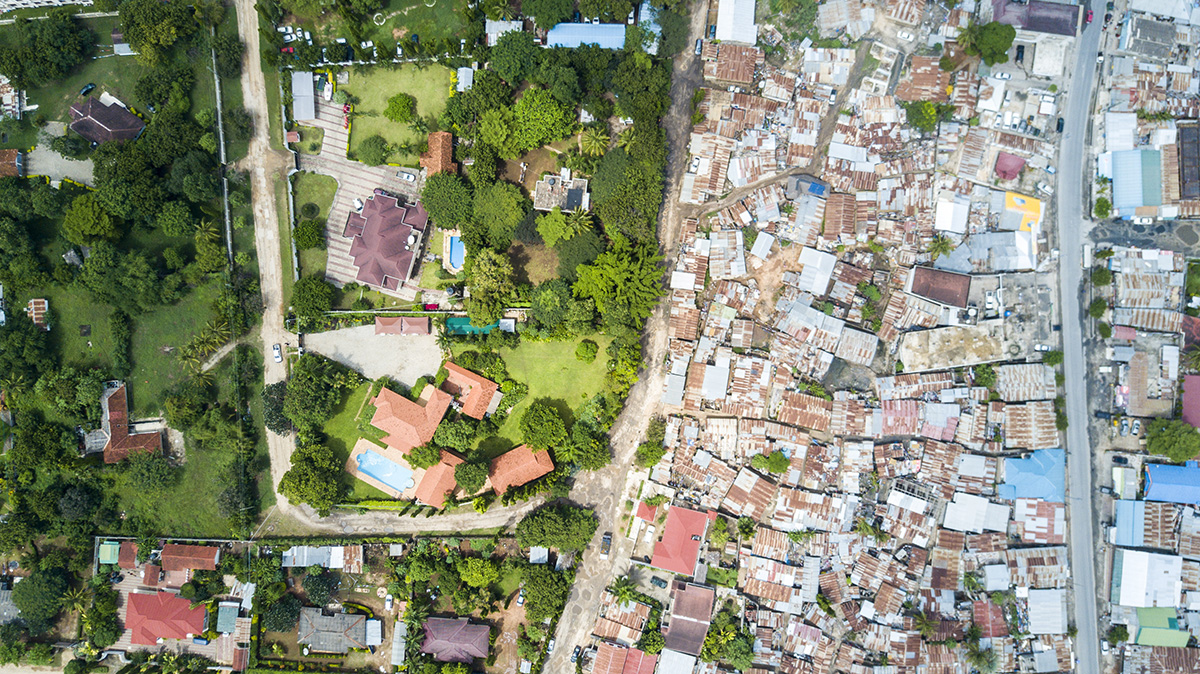 The era of the great idealistic movements is certainly over, the private interest has replaced values and ideals that were supported by systems and structures now greatly reduced … but inequalities, injustices and more simply the problems of humanity are not at the same speed gone. This years’ theme of the Umbria World Fest, 1% i’m rich you are not, lets photographers talk and draw attention to these inequalities. So can photography have an important role in denouncing them? Can one be an artist and an activist at the same time? As part of our partnership with UWF, we asked three questions to Johnny Miller, a particularly attentive photographer who in his exhibition Unequal Scene uses a drone to overcome the visual barriers that prevent us from fully understanding the contrasts that exist side by side in our cities.

There is a flatness, an accessibility within my photographs and in social media today that is an interesting phenomenon. People can see themselves reflected in the richer neighborhoods, they can see themselves as “average middle-class” and identify, feel relevant. This flatness makes us complicit, but it also gives us power, communal power.

Art has always been used by rich people to justify their own wealth and to mythologize their own person. What is the relationship between photography and wealth today?

This is true, and something that we (as artists but also as activists) must be extremely careful of when creating our work and allowing others to display and consume it. I think art is as much a commodity today as it ever was, and as our primary means of transmission are the traditional means (algorithms which reward likes, media which rewards views, galleries which reward sales) it is unfortunately no different, as I see it, than before the advent of the internet or digital cameras. I think we (as activists) need to find ways to surrepitously upend that reality, through craft and stealth to get our message heard.

In some cultural traditions richness is often seen as an obstacle to truly happiness, while in others it is the sign of benevolence of the superior entity or odds. Does richness lead to happiness?

Richness doesn’t necessarily lead to happiness. But being poor at the expense of the rich leads to revolution.

Johnny Miller is a photographer, journalist, and founder of africanDRONE – a pan-African citizen journalist organization. He is based in Cape Town, South Africa, and has extensive networks and knowledge of contemporary African and world issues. He has received worldwide acclaim for his project “Unequal Scenes”, an exploration of inequality around the world using a drone. He is currently working on establishing africanDRONE as an organization, producing content for major international news organizations, and developing new and socially aware storytelling methodologies. Johnny is currently an Atlantic Fellow for Social and Economic Equity at the London School of Economics, and a News Fellow at Code For Africa.

Yourpictureditor. We are an international network of photo editors, expert in visual communication. Our activities are photo & video research, copyrights management, portfolio editing, photo research and production for social media, support for photo-projects. Through this Blog we deepen the themes that are at the heart of the photographic scene, talking with the main players and participating in the dissemination of photographic culture. Get in touch.