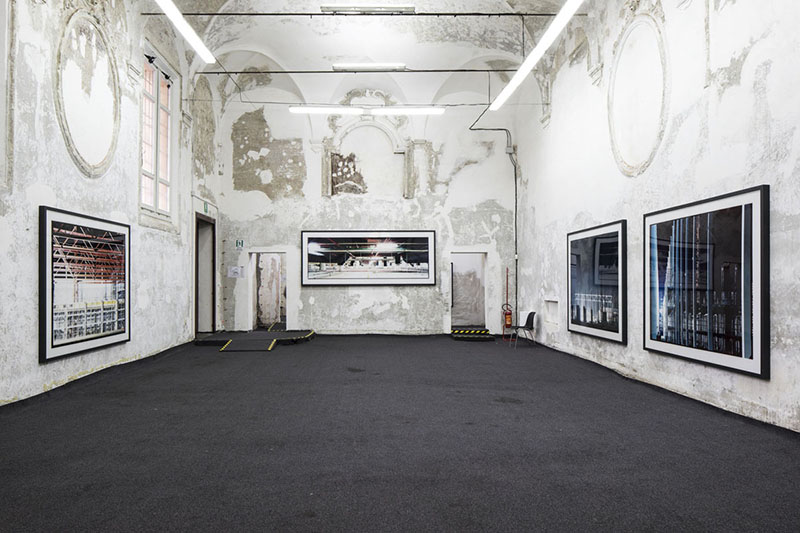 This is the last week available to see Biennale Foto/Industria, in Bologna at its third edition.

The Biennale is presenting fourteen exhibitions by some of the world’s most important photographers: names like Josef Koudelka, Mimmo Jodice, Thomas Ruff, Carlo Valsecchi, Alexander Rodtchenko and others, that made the history of photography.  All the exhibitions are free and in historical buildings of the city. All this is organised by the MAST Foundation, international cultural and philanthropic institution that focuses on art, technology and innovation. Looking at new generations as the primary target, MAST Foundation favours the development of creativity and entrepreneurship also cooperating with other institutions, in order to support economic and social growth, developing new ideas and creating new links.  The MAST Foundation is multiplying its commitment by creating a temporary, living and participatory community that is renewed every two years with the same urge to exchange ideas triggered by the narrative force of the images. It is certainly a place to know in Bologna.

An opportunity not to be missed to talk about these exhibitions with Urs Stahel, chief and supervisor for the industrial photography collection and the exhibition activity of the MAST Foundation. Mr. Stahel has a profound knowledge of the photography world and an impressive record of achievements, like being the co-founder of Fotomuseum Winthertur.

Dear Mr. Stahel,  this year edition of Biennale Foto Industria is rich in very different proposals, that complement each other by creating a conducting line leading the visitor to reflect on the world in its complexity.
Can you explain us the two exhibitions of which you are the editor, Thomas Ruff at MAST and  Carlo Valsecchi at the Ex Ospedale dei Bastardini?

This year we show during Foto/Industria the famous german photographer Thomas Ruff at MAST. Thomas Ruff is the type of artist as a researcher, as an image demiurgeon, who sees the camera not only as an optical-mechanical recording device, but also as a powerful image-forming machine, with which he transformed the elements of the found reality into a new visual dimension, depending on the criterias and the selected recording system.

Ruff takes up different photographic genres: portraits, urban night scenes, images of the sky, landscapes, snapshots borrowed from press clippings, ideal images versus jpeg depictions of catastrophes, photograms created in a virtual dark room. He is an archivist and a photographer, a collector or a creator of raw data, which he pours out onto large-format panels. Art historian Michael Stoeber uses the terms “body machines,” “machine bodies,” machines of desire, computer (machines), and sex machines to define the relationship between humans and machines, which he applies to Ruff’s art to describe it as a large machine that produces images and thoughts. The artist is a processor of images, who incorporates and transforms the found, collected, or generated raw materials of a multi-layered reality and allows them to flow freely onto large framed surfaces.

The photographs in the Machines series form the core of the exhibition at the MAST PhotoGallery. Presented with them are other series by Ruff, including Nights, Houses, Other Portraits, Jpegs, Photograms (r.phg), Negatives (neg◊) and new Press images (press++). These works come together in a powerful choir of voices speaking of machines and energies.

In addition to this show, I have curated at the Ex-Ospedale Bastardini in Bologna the italian photographer Carlo Valsecchi with an interesting project of a new huge factory that Philipp Morris is building right now outside of Bologna. Philipp Morris commissioned him, and he developped as often a double strategy: Valsecchi creates a narrative for the commission and different strategy, abstraction in his art work which he will show this autumn within Fotoindustria.

His photographs visualize the structure and the essence of the  building, the construction and the aim of this factory to be the first huge factory in Italy for smokeless smoking. He tries to visualize the new futurist aspects of this huge plant. In his own words: «The monumental essence of this huge factory space, (for monumental I mean also its extreme automation that reminds as a model to the vision of “2001: A Space Odyssey”) is summed up for me in a relationship between between macro and micro, interior and exterior, between day and night, non-colour and colour, between form and function, between below and above and before and behind, between movement and static.»

Do you want to tell us briefly about the different ways to work with industrial photography for Ruff and Valsecchi, and what does this mean in setting up an exhibition?

The main difference is that for the Thomas Ruff exhibition we have a perfect exhibition space at MAST, while for the Carlo Valsecchi exhibition we enter a 14th, 15th, 16th centry building, the Ex-Ospedale Bastardini in the center of Bologna. This decision required a series of measures. Purely technical ones such as the installation of light, the complete cleaning and emptying the spaces but also more content-related measures. Carlo Valsecchi had to think about how he would integrate his photographs of high-tech processes into such an old building, how deals with this contrast. Secondly, the exhibitions also differ in their conception. Carlo Valsecchi’s exhibition deals with the construction of a large, ultra-modern factory complex built between Bologna and Modena, Thomas Ruff’s exhibition deals with “machines” in general, mirrored in his many different works.

Fondazione MAST also has a permanent collection; how is it formed and is composed exactly? Is it possible to consult it?

So far it is not possible to consult it. But we are about to change that. I guess that within a year from now we will have kind of a study center of industry and work related photography and their books.

The MAST collection of industrial photography starts in the 1860ies and runs through the history of industry into todays high technology. It contains visuals of a variety of different industries – mining, machine industry, chemical industry, textile industry – shows buildings, plants, industrial aeras, developping departements and production, blue and white collar work. It concentrates as much on important famous images as unknown material, anonymous photographs in order to mirror the field of industry, technology and work within our societies as broad and intense as possible.

As you know there is not one type of industrial photography, there are many, at least 3 of them:

1. Industries employed photographers. Their photographs are often anonymous, as nobody signed them. They reflect the inner vision of a company at that time. But watching them today, after decades, we can easily divide between reality and propaganda.

2. Social engaged photographers entered companys to document how good or bad the workers were treated, how safe the working condition were, how dangerous it might be. Often they were not officially allowed to enter as industrial aeras were closed in cities.

3. Artists are dealing with industrial issues, they work along the line of industries and societies, deal with the language of industrial invention, production and promotion.

Which are the other exhibitions that you think should not be missed?

Definitely Joseph Koudelka, with his immense pictures on industry, or Alexander Rodchenko and his photographs of the 1920’s that show the utopia of work and industry in the Sowjet Union, or the melancholic images of Mimmo Jodice about children work in Neaples. But actually each exhibition offer a different and interesting point of view.

A guide to a guide, so that even the less prepared visitor can read and understand the Biennal of Industrial Photography?

There is a guide that no only indicates perfectly each exhibition in the map of the city and gives a short introduction. But also all side events, lectures, conversations, film screenings are marked in there. And, maybe most important: they indicate good restaurants in Bologna. All events and exhibitions are for free. Quite extraordinary.

Urs Stahel, born 1953 in Zurich, studied German Literature, History and Philosophy at the University of Zurich. He worked as Editor of both the ethnographic magazine Der Alltag and the art magazine Du, and as a freelance curator.
He achieved a milestone as co-founder of the Fotomuseum Winterthur. In cooperation with the publisher Walter Keller and the sponsor George Reinhart he created one of the world’s most relevant spaces for photography and successfully managed it for twenty years. Since 2013 he is the curator of the MAST Foundation in Bologna photo-collection on industry and labour and of the MAST PhotoGallery exhibitions.
He curated the Fotofestival Mannheim-Ludwigshafen-Heidelberg Autumn 2015.
He also works as an author and consultant, and as lecturer for the ZHdK Zurich and the University of Lucerne.